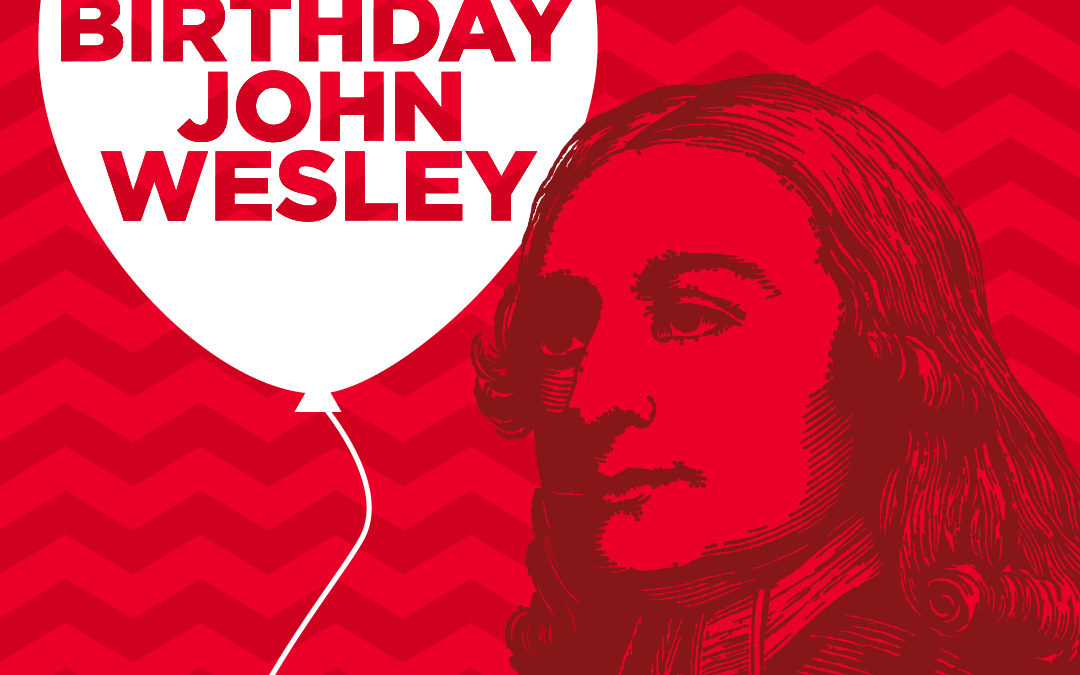 Wesley was born on June 17, 1703, while England was still using the Julian calendar. England adopted the Gregorian calendar in 1752 and thus Wesley’s birth date became June 28.

His birthday reflections give us a glimpse into how he viewed his life, health and ministry. On June 28, 1770, he wrote:

I can hardly believe that I am this entered into the sixty-eighth year of my age! How marvelous are the ways of God! How has he kept me, even from a child! From ten to thirteen or fourteen, I had little but bread to eat, and not great plenty of that. I believe this was so far from hurting me that it laid the foundation to lasting health. When I grew up, in consequence of reading Dr. Cheyne, I chose to eat sparingly and drink water. This was another great means of continuing my health, till I was about seven and twenty…; (He then speaks of various ailments.); Since that time, I have known neither pain nor sickness, and am now healthier than I was forty years ago! This hath God wrought!

He started to set a pattern for indicating his age and his good health. One year later, he wrote:

This day I entered the sixty-ninth year of my age. I am still a wonder to myself. My voice and strength are the same as at nine and twenty. This also hath God wrought.

This being my birthday, the first day of my seventy-second year, I was considering. How is this, that I find just the same strength as I did thirty years ago? That my sight is considerably better now and my nerves firmer than there were then? That I have none of the infirmities of old age and have lost several I had in my youth? The grand cause is the good pleasure of God, who doth whatsoever pleaseth him. The chief means are: (1) My constantly rising at four, for about fifty years. (2) My generally preaching at five in the morning, one of the most healthy exercises in the world. (3) My never travelling less, by sea or land, than four thousand five hundred miles in a year.

In the intervening 10 years, he repeated these sentiments numerous times, and even in 1784, he wrote:

Today I entered on my eighty-second year and found myself just as strong to labour, and as fit for any exercise of body or mind, as I was forty years ago. I do not impute this to second causes, but to the sovereign Lord of all…; I am as strong at eighty-one, as I was at twenty-one, but abundantly more healthy, being a stranger to the head-ache, tooth-ache, and other bodily disorders which attended me in my youth. We can only say ‘The Lord reigneth’ While we live, let us live to him!

In 1788, after praising God “for a thousand spiritual blessings,” Wesley listed as questions what may be some of the “inferior means” for achieving such good health into old age.

This day I enter into my eighty-eighth year. For above eighty-six years, I found none of the infirmities of old age: my eyes did not wax dim, neither was my natural strength abated. But last August, I found almost a sudden change. My eyes were so dim that no glasses would help me. My strength likewise now quite forsook me and probably will not return in this world. But I feel no pain from head to foot, only it seems nature is exhausted and, humanly speaking, will sink more and more, till ‘The weary springs of life stand still at last.’

As this remarkable man aged, he reflected on God’s blessings and how his lifestyle contributed to his good health. This is but a brief glimpse into his humanity and can call on us to do likewise on our birthdays.

Editor’s Note: This story was first published on June 25, 2012 on https://www.umnews.org/en/news/marking-john-wesleys-birthday-in-his-words.

*Williams is the top executive of the United Methodist Commission on Archives and History in Madison, N.J.