Off to Puerto Rico 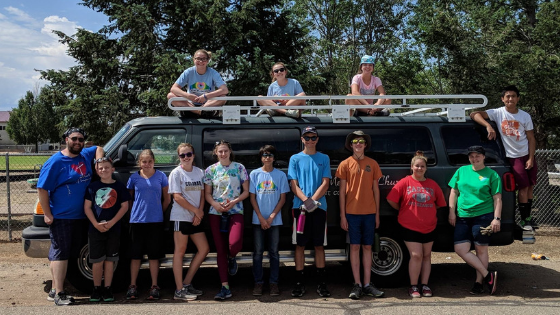 To fold the hands in prayer is well, to open them in charity is better. ~ French Proverb

The Heart of Longmont UMC youth group is soon to embark on a special mission trip – their first outside the country.

“They’re so excited!” said their leader, Emily Farrenkopf. “We’re going to spend a week in Ponce, Puerto Rico, to help mostly with cleanup from the 2017 Hurricane Maria.”

In a Power Point presentation about the trip, Emily pointed out the town’s continuing struggle with poverty made worse by the devastating hurricane.

“We’d been planning on this trip for a while,” she said. “In order to better afford this opportunity, we deliberately planned our last two trips to be less expensive, so we could save for this one.”

After searching opportunities online, Emily discovered TEAMeffort, a well-established Methodist group based out of Florida. After lining up housing, flights and rental vehicles, Emily held meetings with parents and team building sessions with the teens who are going on the trip. While in Ponce, they will stay at a Methodist church, where they will have meals, mattresses and access to showers. Passports and immunizations aren’t required for this trip, but the matter of immunizations will be up to the teens’ parents and doctor recommendations.

During the mission trip, the youth will be doing some form of hands-on projects such as painting, landscaping and possibly building with a TEAMeffort staff member present to help along the way. Emily added that there is a small chance they’ll be working on one of the days with kids at a camp, adding that her group will have the opportunity to experience the local culture, where some families struggle with just the basic needs.

One of the challenges of this trip, according to Emily, will be to get her teens to give up their cell phones for the entire week, adding that they will be working hard while giving up their “security blankets.” Another challenge is the language barrier in the predominantly Spanish-speaking country. One of the teens in the group, however, is a native speaker, and Emily is grateful that they will have their own built-in translator when needed.

With nearly everything completed to prepare for this out-of-country trip, the finalization of the funding will be the focus until the June 9 departure date. Each group member is paying $300 out-of-pocket, and a single scholarship is available for use if needed.

“We don’t want anyone to miss out because they can’t afford it,” Emily added. “We always have options for them. As a group, we’re about $3,000 short of what we’re looking for. We have a Facebook fundraiser that garnered $1,000 in just a week. We also have some upcoming fundraisers not yet finalized. We’re looking at a silent auction, t-shirt sales or change jars, but we’re still deciding what to do next.”

And then there is the March Compassion Offering. As always, the youth are thankful for the support of their Heart of Longmont family, and that they are the beneficiaries of Compassion Offering next month. Emily reflected on the constant support shown by the church, adding that “it has always been a huge part of our mission successes.”