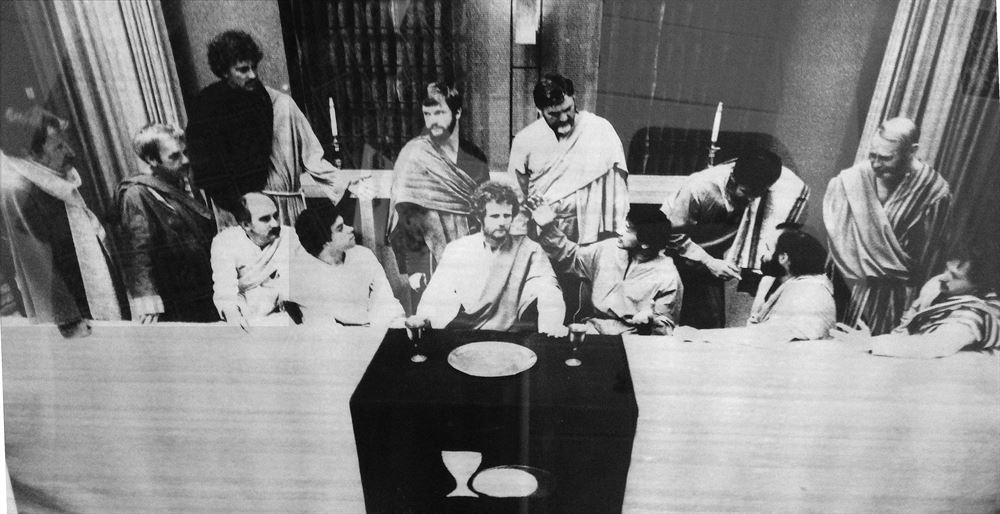 When I’m trying to think of a story idea for The Pulse, it’s especially nice when someone comes to me with a tip of their own. So, when Ann Yoder came to me with an idea to go along with this photo of the Last Supper reenactment by church members, I thought, “what better time than Holy Week?”

When Ann and her husband, Gordon, came to the church in 1976, the reenactment was already an annual Maundy Thursday service tradition when Barry Kimbrough was pastor.

“It was a very effective part of the service,” Ann said. “There were no speaking parts, but a script was read. That reenactment continued for a few years after Keith Watson came in 1986.”

“During that time, we had an active worship committee that came up with church service ideas like the Last Supper reenactment,” Ann recalled. “I remember how impressive the reenactment was every year. It added so much to the meaning of Maundy Thursday.”

Of the men pictured in the photo, three are still with the church. They are Mike Morris, Jerry Ahnstedt and Jeff Brown. The others have either passed on or moved away since the photo was taken. When you look at the photo, now hanging in the Gallery, you’d be amazed at how “real” it looks. Almost like a scene from an old movie.

“The church has gathered a supply of different costumes through the years,” Ann said. “I would guess that these togas pictured were mostly handmade, and we still have some in our costume collection.”

Perhaps those toga costumes are just waiting for someone to give them new life with the resurrection of the Last Supper reenactment. I can’t think of a better way to feel and witness the powerful message of Holy Week. Can you?