The Many Faces of Zion’s Herald 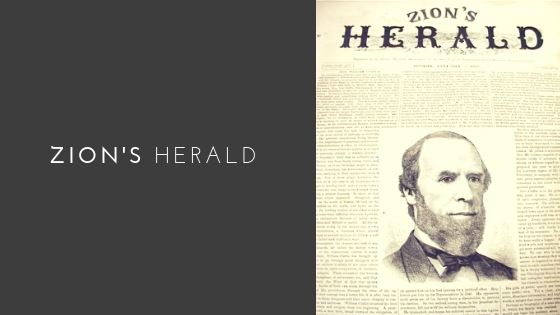 Having spent a 25-year career in the newspaper industry, I’ve always had an interest in all types of newspapers, magazines … anything print-related. One thing I’ve learned about newspapers is that change is constant. If not family-owned, newspapers are sometimes subject to purchase by – or merged into – a larger newspaper group. These business moves can either be profitable or they can be the “kiss of death.”

As I was thinking of a topic for this week’s Pulse, I thought I’d find out if the Methodists had a newspaper, and when it began. It turns out that they did and, typical of today’s newspapers, this was a publication that really got around in its day.

In the early 1800s, Methodism was a small but growing denomination seen as intruders in Massachusetts by Baptists, Unitarians and others. It was during these hostile times, in 1823, that a group of clergy and laity came up with the idea of a weekly newspaper written by Methodists for Methodists. The people who read it were influenced to engage in discussions of its theological articles and to even write letters to the editor.

The publication was named Zion’s Herald. The word “Zion” meant the rising up of a monument, and “Herald” referred to a messenger who proclaimed and advocated. Although it wasn’t considered an official publication of the Methodist church, it was the first weekly Methodist publication in America, existing under the original name for five years.

It was in 1831 that the Boston Wesleyan Association acquired Zion’s Herald, replacing its New England Christian Herald. During the years through the turn of the century and up until 1992, the paper went through several name changes and became an insert in other publications before being published on its own again from then until 1996. For a while after that, it was a section of the Cross Currents news magazine.

From the Zion’s Herald humble beginning, the publication always enjoyed editorial freedom – albeit controversial at times – to inform, enlighten and engage its readers throughout the years.