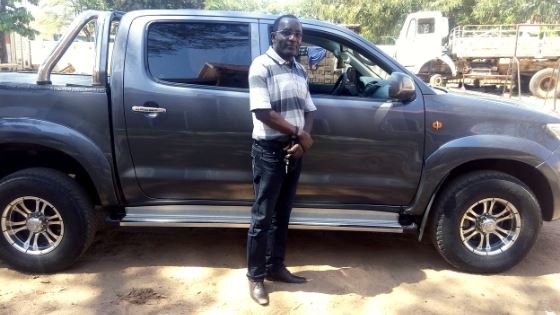 Ken (pictured above) and the truck the Mountain Sky Conference helped purchase for him.

Missionary to East Angola Ken Koome will be at Heart of Longmont on Monday March 18, 6:00 pm to share about his work. Ken is one of several missionaries the Mountain Sky Conference supports.  We will have a potluck dinner that evening and everyone is invited.

Ken serves as a Global Ministries missionary in the East Angola Conference of the United Methodist Church.  He is the financial officer for Advance projects in the East Angola Conference, which means that he is key to all the work being done through the church in East Angola. He pays the pastors the salaries raised by churches across our conference, he facilitates the agricultural work being done at Quessual Methodist Mission, he assists in the rebuilding of churches, oversees Imagine No Malaria work, and helps with visiting UMVIM teams. Since he is key to so many projects, he can share about the many ways that the United Methodist Church is making a difference in the lives of our brothers and sisters in Angola. He is looking forward to being in the Mountain Sky Conference, the largest supporter of these projects.

He has served with Global Ministries for many years as a missionary in Nigeria and as a financial officer based in Nairobi, Kenya (his home) where he was sent all over Africa to assist conferences regarding financial matters. He has years of experience helping the United Methodist Church grow and develop.